Read about our journey in this blog

DutchEOS is becoming DutchTelos! As for some time now, our EOS activities have made way for a focus on Telos, it’s time to reflect this in our name. Therefore the DutchEOS name will make way for DutchTelos. We took this opportunity to revamp our branding as well, with a new logo and style, but keeping the familiar association with the Dutch windmill.

Let’s talk a bit more about how we got to this point.

DutchEOS was founded in early 2018 just in time for the EOS mainnet launch planned for june. We worried however, that the postponement of some of the envisioned governance mechanisms would have a deleterious effect on the health and striking power of the chain. That’s why we soon found ourselves among a group of like-minded individuals to lay the groundwork for the Telos Blockchain Network. Being able to evaluate the effects of some of those early EOS choices allowed our founding team to better prepare a launch.

Our fifth year of involvement with the Telos Blockchain will soon start, as the summer of 2018 is when we teamed up with Douglas Horn and a group of many tens of like-minded people to make Telos a reality. We were already involved in the EOS launch, and remained a candidate there for some time too. But the hasty EOS launch also meant that it was difficult to evolve the chain from that point on. It was here that Telos shone right away: learning from the early mistakes of EOS we took the time to prepare for better governance, and adapted the eosio platform (which is now called antelope) to be able to evolve the chain quicker even after launch.

It was and is clear that Telos vastly outpaced EOS, due in no small part to this more deliberate launch path.

Fast forward four years, it’s truly remarkable what Telos has achieved. As a Block Producer we have said goodbye to EOS now, but our branding was lagging behind.

Now it’s time to elevate our brand, to showcase our pride in being part of the Telos blockchain for all these years…

From now on, we will be flying under the DUTCH telos banner!

Our core values remain unchanged: Reliable, ethical and involved. And we will continue to add value to the network and community:

Please vote for us as one your preferred network validators (on chain: votedutcheos)

Join us on this journey on any of our DUTCH telos channels: Follow us on Twitter for the latest news, subscribe to our YouTube channel for tutorials and more in-depth news, and come have a chat on Telegram or Discord. 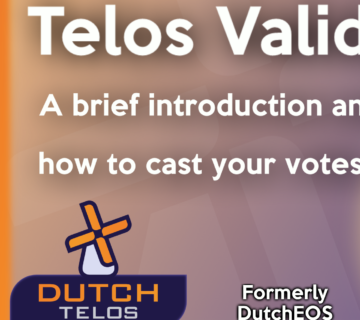